1938. Lean times. Tough times. What can a man do to make a living? Carl Platter decided to do what friends and family said he did best…make chocolate. “Not just any chocolate Carl, but that chocolate you make with your recipe for orange flavoring”. So Carl started Platter’s Chocolate part time in the basement of his North Tonawanda, NY home.

Without a storefront, Carl’s wife Vera would go door to door throughout the town selling Platter’s Orange Chocolate. Carl and Vera made their chocolate affordable, and families were delighted to have a special “treat” in these very difficult times. A tradition was started.

Times got better, and Carl and Vera’s business grew. To keep their chocolate affordable, when their basement ran out of space and a store was needed, they rented the basement of the house next door. Amazingly, Carl and some friends constructed a tunnel under the driveway connecting them both.

Carl’s primary employment was with Merckens Chocolates in Buffalo, NY.  Story has it that Mercken’s management wasn’t happy with Carl & Vera making their chocolate on the side, so after years of service Carl and Merckens parted ways.  As fate would have it and unknown to us until just recently, before Carl started making his own chocolates full time, he worked for a short period of time at the Wurlitzer Plant.  A March 22, 1950 article in the Tonawanda News tells us that when he was laid off from the Wurlitzer Plant, he came home and told his wife Vera, “Chocolate is what we know and what we are going to do full time”.

As time went on, people throughout North Tonawanda, NY knew “the secret”, and had to have their Orange Chocolate, especially during the Easter Season.  It got so when a family left the area, they wouldn’t allow visitors from the “old neighborhood” unless they brought along Platter’s Chocolate. Carl and Vera worked the business until their retirement in the late 1960’s.

A boy by the name of Roger Urban grew up down the street from Platters. Roger owned and operated the local Pharmacy. In 1972, Roger purchased Platters Chocolate and said good-bye to the Pharmacy business. Roger knew that others outside of the North Tonawanda area would find the rich, creamy, milk, and orange chocolate irresistible, so he began wholesaling to Drug Stores and Delicatessens in other parts of Western New York. 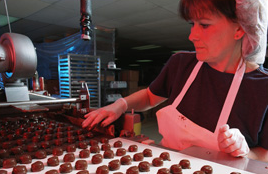 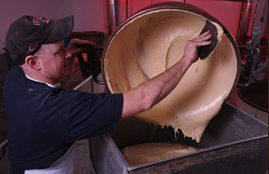 In 1992, Roger purchased Betty Dixon Candies of Jamestown, NY. More and more customers were asking for additional chocolates such as Creams, Caramels, Jellies, and especially Sponge Candy. It was a perfect compliment to the molded Milk and Orange Chocolate Platter’s has become known for. With business continuing to grow, Roger’s sons, Bruce and Joe, joined their sister Sherry in what was truly becoming a family business. TRIVIA: Legend has it that a extremely famous female Comedian originally from Jamestown NY once worked a short time at Betty Dixon, inspiring her to write one of her funniest episodes ever! HINT: She had Red Hair.

In 1993, tragedy struck. Right in the middle of merging the two manufacturing facilities, Roger was diagnosed with terminal cancer. He passed away at the young age of 59. He is missed every day. Grief stricken, the family was more determined then ever to see Roger’s dream through.

Roger’s law; “provide a quality product at a price folks can afford. That’s the way Old Man Platter did it, and that’s the way we do it”.

In 1995, another 7,000 sq ft was added to make it possible to increase production WITHOUT compromising quality. Also, at the urging of our customers, this space allowed us to expand our retail store to 2,000 sq ft, displaying all our Chocolates along with unique gifts. In the summer months we added Platter’s Ice Cream Shoppe to help you cool down on a hot day. Our special “Orange Flavored” Hot Fudge has become a favorite topping for any of our 18 flavors of hard and soft ice cream!

In 2004, we added our On-Line Store. Our products have been a local secret and many of our customers who grew up with the Platter’s tradition have relocated. They order online and we ship them their “fix”. Then their neighbors “sneak” some while their backs are turned and they’re “hooked”.  Today, you can conveniently order everything you need online, from our delectable Sponge Candy, to our traditional Orange Chocolates and everything in between.

Finally, in 2016, we made a tremendous jump to a new location at the Wurlitzer Building!  The Urban family always felt that if they ever did move from the Oliver Street location, a facility that would allow our customers to view our chocolate making processes would be key.  Only problem, there weren’t too many facilities in North Tonawanda that could support this idea.  Truth be known, we really ‘stumbled’ onto the Wurlitzer Building and were a bit apprehensive, but thanks to the amazing support and urging that we got from North Tonawanda, Niagara County, the staff at the Wurlitzer and of course, our TREMENDOUS customers, we made the jump; and couldn’t be happier!

With multiple viewing area’s, our customers enjoy grabbing a cup of Coffee at our Café or a Sundae at our Ice Cream Shoppe year round and watching us make everything from our molded novelties, to Pecan Caramel Frogs and of course our famous Sponge Candy.  A relaxed, social atmosphere, Platter’s has become a destination for families throughout Western NY.  Keep an eye on our calendar of events to keep up on exciting happenings and specials throughout the year.  We also offer guided tours for groups of 20 or more.  Our facility is beautiful to be sure, and we receive many accolades, however we NEVER let someone leave without letting them know “if it weren’t for our customers, this could never have happened”.  Enjoy!

From all of us at Platter’s Chocolates, we THANK YOU for your business, your support and your kindness.  We welcome your comments, and we hope to hear from you soon and often!